Already a few people have pointed out that the webOS virtual keyboard doesn't have arrow keys (and the bluetooth keyboard's arrow keys don't seem to be supported outside the core webOS OS), so I have an updated release in the queue that adds an arrow icon overlay to the bottom-right corner of the flash control. It's been 'Ready for Review' for a few days now, so hopefully it'll be updated and available any day now.In addition to a webOS version, I also ported fTelnet to run on the BlackBerry PlayBook as an AIR app. I really didn't have any interest in going further than the TouchPad, since that's all I own, but then I read about the free PlayBook tablet offer and couldn't resist! Just received confirmation earlier this afternoon that my app has been accepted, so it's now on RIM's BlackBerry App World! As with the webOS version, this one has a new release in the queue that will address the missing arrow keys, but it'll probably take somewhat longer for this update to appear since there's LOTS of developers trying to get a free PlayBook, so their review team is stretched pretty thing right now.

In the next little while I'll probably investigate porting fTelnet to Android, which also supports AIR apps, so it should also be pretty simple. Since my TouchPad is running an early alpha of "ice cream sandwich" I'm not sure how useful it will be for debugging, so I may or may not be able to work on this right away.

From what I understand iOS also supports AIR apps now, which means the $600 barrier to entry (bottom of the line Mac mini) should no longer exist, but until Apple removes the $99/yr developer program membership fee, don't expect to see fTelnet on your iPad.

Another oops...I uploaded the wrong WBA.exe yesterday, so Chrome 16+ was STILL broken! So if you downloaded 11.11.02 yesterday or earlier today, then please download it again. Hopefully that's got it fixed now!

Oops, totally forgot to upload the new release with the updated WBA, which added support for the latest version of Chrome. I've now finally uploaded it, although since it was only WBA and not fTelnet that was changed, I didn't bother increasing the version number. So if you use WBA, please download 11.11.02 again, and if you don't use WBA, then just ignore this post.On somewhat related news, fTelnet was finally accepted into the HP webOS App Catalog early last week! I've already got a second release in the review stage, so an update is already on the way. And in addition to that, someone pointed out there's no way to use the cursor keys (since the TouchPad's virtual keyboard doesn't have arrow keys, and the bluetooth keyboard's arrow keys don't work in Flash), so a new update should be coming shortly with an on-screen overlay that will allow you to use arrow keys.

Also on a somewhat related note, I've ported fTelnet to the BlackBerry PlayBook, since they're running a promotion giving free PlayBooks to developers right now. So anybody with a PlayBook can look for that in the BlackBerry App World soon! (They're backed up due to the large number of submissions they recently received, so I'm not too sure exactly how soon though!)

Happy New Year! Thought I'd share this screenshot of fTelnet running on my HP Touchpad! I picked one up during the fire sale awhile back, and haven't had much use for it until now! And the coolest part of all is that webOS allows me to embed a proxy server, so you can use it like a REAL telnet client, and not require the remote side to be running a flash socket policy server!

Also, for those of you using WBA, I'm hoping to get a new release out later tonight to support the latest version of Chrome (HtmlTerm currently won't work with it). 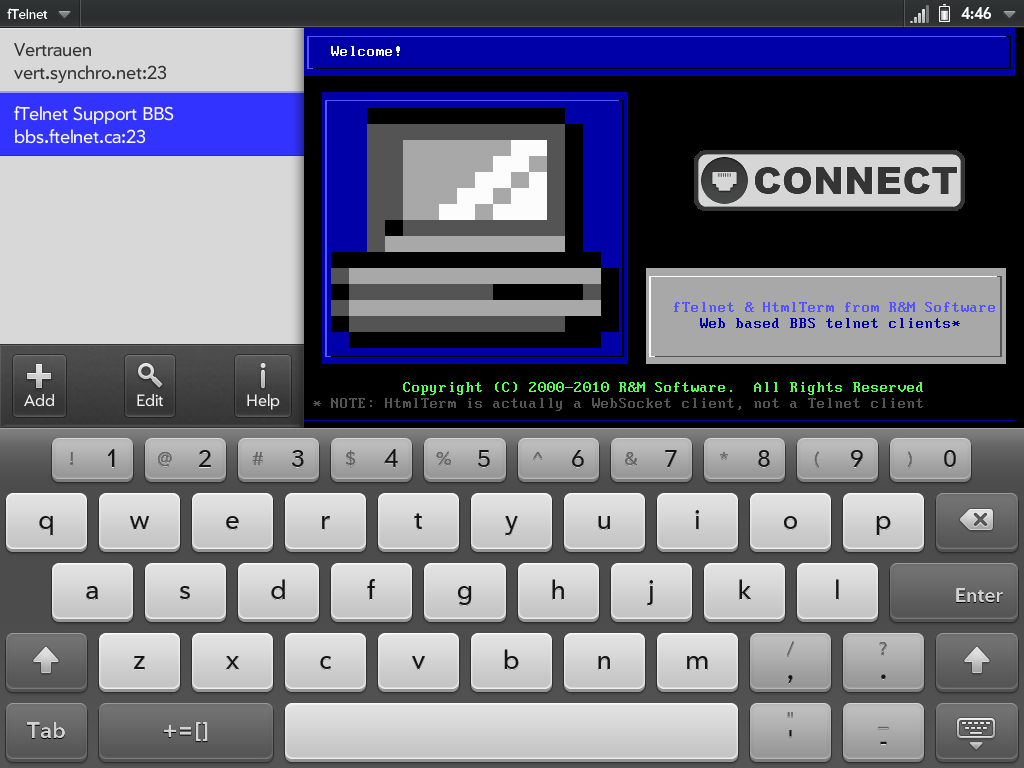 I've just fixed a bug in fTelnet that was causing the RIP parser to work incorrectly in some cases, resulting in a blank screen. This was known to affect NetFoss and Renegade, and there were possibly others. So if you tried to use fTelnet in RIP mode with your BBS and found it didn't work, then try again and hopefully it works now (and let me know if it doesn't!)

I've just released a new version with an update for WBA and a (hopefully) fix for the RIP icon problem. I don't have LORD installed to test right now, so please let me know if it does or does not load the RIP icons now.

Forgot to put the crossdomain.xml file in place, so RIP mode was unable to load a necessary file from www.ftelnet.ca, which was causing it to fail. It's now in place, so hopefully RIP will finally work!

I've just released a new version with a bugfix for WBA and a bunch of changes to fTelnet. Most of the changes to fTelnet are rather unimportant feature wise, but helped reduce the size of the .swf greatly! I'm a little concerned I may have broke something in the process, so if you notice anything not working right, please drop me a line.

Like something you see here? Consider donating to keep development alive!

(Please note that donations are not tax-deductible for income tax purposes.)